Fiona’s husband was more often away at sea than he was at home. One night during the season of high winds and gales a stranger came to the door. It was a man with the sodden look of someone washed up on a beach after a ship wreck. His great sea coat was tattered and his hair hung down over the collar.  He asked if he might take shelter and so, Fiona’s older son, Hamish* showed him to the  enclosed shed where a few cows and sheep took refuge at night.  Fiona later brought out a wash basin and some clean dry clothes that belonged to her husband. He took them gratefully but did not answer when she asked him how he came to be traveling on such a night.

I see the mist covered hills….  I will soon be welcomed– the Rankin Family -Chi mi na morbheanna

At the house, Fiona reassured herself that her husband’s pistol was within reach in the hutch before sending Hamish to fetch their guest to the kitchen. As they sat down at the table she was surprised to see that he was very handsome in a darkly brooding way.  When asked his name, he hesitated a moment, but then replied “Duff,”*  and looked up expectantly as if awaiting approval of the appellation.  Fiona’s boys, usually so talkative, were quiet during supper. They all seemed spell bound and sensed something both disturbing and strangely fascinating in Duff’s appearance and odd demeanor.  His intense eyes fixed everyone in their gaze and his posture was alert to every sound and movement. Afterward he thanked them and took the bed coverings that were offered. Fiona watched him walk toward the outbuilding and locked the doors before retiring to bed. During the night the wind died down and they heard singing coming from the shed. It was a strangely captivating song full of such longing that it sent an echoing shiver into the intimate depths of her.

The next day she saw he had let the sheep out to graze. He later came to the back door with peat for the fire and some shellfish to prepare. In that moment Fiona realized how much she missed her husband.

By nightfall the weather had worsened again.  The storm howled through Fiona’s emptiness and somehow it came to be that she found herself delirious and in the arms of the mysterious Duff. His skin tasted like the salt sea and she felt as though she had been caught in a fierce undertow while the surf filled her hollow bones with wild song.  The sound of a rushing wind inside her ears drowned out everything but the distant cries of a lone gull, or perhaps it was her own voice that she heard.

In the morning the storm had broken.  The sun came up and the stranger was gone. Her husband’s clothes and the bed coverings were all neatly folded in the wardrobe. Everything now seemed hazy and elusive, and Fiona wondered if indeed any of it had happened at all.

She inquired in the village if there had been news of any vessel that might have run aground in the bad weather but none had been reported. Two weeks later the captain returned at last and within the month she knew she was with child.  Fiona and the boys never mentioned the visitor who had not been seen again since that time. It was as if they all had dreamed the same dream but Fiona knew that the baby growing inside her was very real.

PS: I am behind again and scrambling to catch up!

chapters one and two 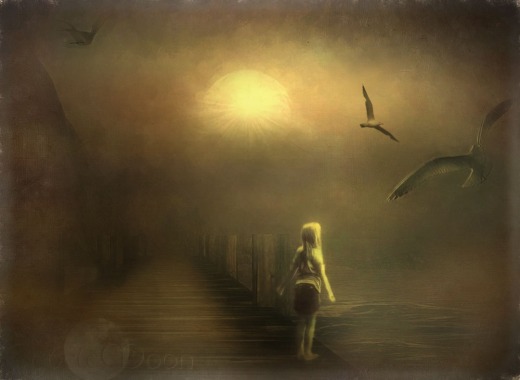