A spooky tale for Halloween- 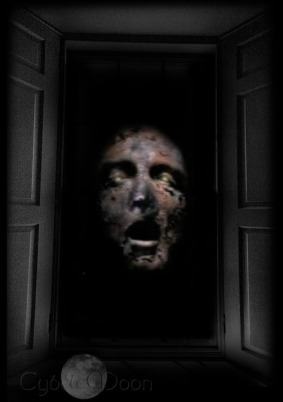 Oh no!  thought Charles as he lay quietly in his bed! The small lamp on the side table began to sputter and flicker and as briefly as a candle it suddenly went out!  It was dark now and the Bumper was back! He could hear it coming up the stairs from the basement.  Down in that Stygian pit a huge ancient furnace grinned fire and gnashed toothy grates.  It had multiple arms that reached into the upper floors of the old house, blasting heat and searching for unbelievers. The Bumper was the fire breather’s minion and had made a home for itself in the dark recesses behind the coal bin. Charles wasn’t absolutely certain of this of course because he would never go down into the cellar. Somewhere down there, he was sure, was the entrance to an even more hideous and unimaginable underworld.

Charles had never wanted to move here to the countryside. He liked the modern and airy flat they had in town. There, the glow of street lamps shone into his bedroom window at night and there was no unfamiliar clamour in the walls. Most importantly there was no netherworld in a city flat. Charles ears were not accustomed to the strange sounds that his parents called “the old house settling.” At night he often heard things being dragged around in the cellar. Sometimes it was a grating noise, sometimes the clicking of a clawed finger and other times it was the swift shuffling of deformed and toeless feet. Usually the sounds stopped at the foot of the stairs leading up to the pantry.

But on dark moonless nights, in the middle of autumn, the winds blow cold and strip away the tree branches. They sweep against the shutters like bony, fumbling fingers and it seemed then that the Bumper became very bold and would often roam the upper floors. It always managed to open the closed cellar door even though it had no hands or for that matter any proper limbs at all.

To make matters worse, the moaning of a disembodied spirit in the wardrobe assailed Charles’ small ears as he pulled the blankets higher.  His mother said it was just the wind but Charles knew that somewhere behind his clothes and toy boxes there was a cavern of lost and miserable Ghosts who howled loudly their displeasure at being dead. If somehow by an inconceivable carelessness, the wardrobe was not shut properly, they would all rush out into the dark like rabid bats and suck out the souls of anything that breathed. In doing so they could again savour memories of the living. Charles wondered if that should happen how long he might be able to hold his breath. Thankfully mom had closed the doors tightly before she kissed him goodnight.

He lay very still in his bed and waited for the terrible and elongated legs of the Bog Beast to walk by in the garden. The Bog Beast had no head, just a grotesque, hairy snout that sprouted from its’ bony shoulders and as it paused at the window Charles could hear it huffing and sniffing the air for human flesh.  He was relieved that mom had locked the sash and closed the shutters on this cold night so the creature would not smell the damp fear coming from the room inside.

The urge to urinate was getting stronger.  He could get up and run like mad down the hall but he wasn’t sure if the situation was urgent enough yet to take the gamble.  Under the bed and hiding inside the vent, a Ghoulie’s soft jelly fingers were waiting to grab him by the ankles. If he was caught he would be dragged screaming, down and down through the furnace pipes, and into the sacrificial belly of an insatiable Moloch, whose blazing limbs squirmed in joyful anticipation of receiving the immolated bodies of little children.

At any rate he knew it was probably best to try to lie there and wait for the redemption of dawn, hoping he could last that long.  Charles thought of his dear old grandmother who took very seriously the machinations and mischief of those who inhabited that other realm. He began to fervently recite the old Scottish prayer she had taught him,  “From ghosties and ghoulies and long legged beasties and things that go bump in the night- Good Lord preserve us!”  He had never felt the need to utter that supplication in the old flat but it was a great comfort and protection in a house like this!!

Finally Charles, could hold it no longer. He had to make a break for it and so he jumped out of bed and sprinted toward the WC. The dimly lit hallway seemed longer and longer at this time of year.  Shadows crinkled over the walls and floor like cut out paper creatures, full of flattened malevolence.  He felt the heated hands of the register ghoul just miss his feet as he at last leapt over the threshold and into the bathroom. He heaved a sigh of victory and relief as he shut the door. 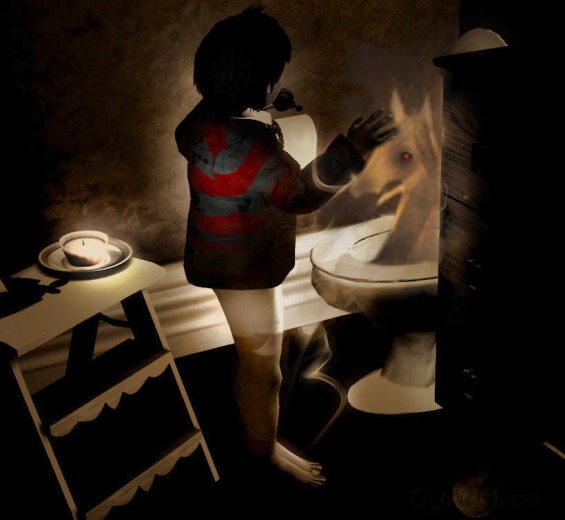 That night there was a more than usual knocking of the water pipes. In the morning Charles was nowhere to be found. His slippers were by his bed in a puddle caused by a streaming overflow from a backed up toilet bowl. It was later discovered that a pajama top somehow got stuck inside the pipe and caused the blockage but where Charles went remained a mystery. The local constabulary thought he must have wandered off in the dark and drowned in the bog. Unfortunately for poor Charles, in his granny’s prayer, there had been no plea for respite from those deadly denizens or “*kelpies” of  the  plumbing pipes  who rose up from the deep like a herd of  homicidal horses  waiting to stampede to freedom in that first flush of the water tank.

*kelpies: A Celtic mythological creature.  In Scotland they are shape shifting water spirits often appearing as malevolent horses or if in human form, retaining hooves for appendages. They liked to drown their victims.