This is a site well worth the visit  and I’m sure it has the same effect on the onlooker as on those who visit the monument of 9/11 or the Viet Nam War Memorial. It is another of history’s stories of honour and courage, power, greed and futility.  Culloden is a bleakly beautiful moor lying at the gateway to the highlands just outside of Inverness.  In season, Scottish thistle, heather and wild flowers bloom in the peaceful fields.  The old thatched farmhouse that was a silent witness to the battle in 1746 still stands, with highland cattle and horses grazing nearby.

The Culloden Memorial Museum has a 360 degree theater inside the building that gives you the impression of being in the middle of the battle.  Before entering the movie you walk down a darkened hallway as though you are trudging through the night rain, hungry, tired, poorly armed and thinking with dread of what the day ahead might bring. From the shadows, you can hear the voices of commanders and clansmen encouraging you onward in the glorious hope that Bonny Prince Charlie will sit upon the stone of destiny as king,  and your small croft of ancestral land with sheep, cows, and “hame”  will not be lost. Some of the men wrote poignant letters to wives and families they would never see again.

Many of them were armed only with swords or sticks and I tried to imagine what it must have felt like going against a fully equipped army of carbine and canon. They had the pipers to spur them on but in the end 2000 highlanders lay dead or dying.  Those who escaped were hunted down and executed. The Jacobite Rebellion was over and the highland clearances continued relentlessly.

At any rate it’s impossible to walk out dry eyed  after watching the film and I was deeply moved as I walked through fields that had been steeped in blood and were now strewn with the solemn marker stones bearing the names of those clans that fell. I thought perhaps I was walking on the ghosted bones of some of my own ancestors among those MacPhersons, MacDhonnachaidhs, MacLeods and Murrays. Their names are echoes in the piper’s tune and their dust is fused with the earth of Culloden Moor. 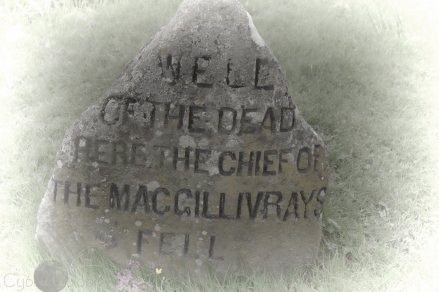 Well of the Dead 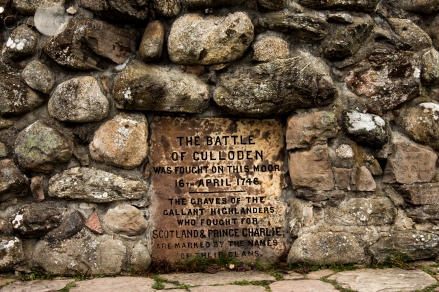 Still from the film

Background:  The Irish and French supported the Jacobites against the British and fought alongside them. The French tried to warn the highland commanders that they were ill prepared to face the English but there was no turning back. The Irish Brigade shouted  “Cuimhnighidh ar Luimneach agus ar Feall na Sassanach”  or Remember Limerick and Saxon Perfidy!

The Highland clearances were also known as  Fuadach nan Gàidheal, the “expulsion of the Gaels”

“Bonny” Prince Charlie escaped with the help of Flora MacDonald to the Isle of Skye and then to France.  He sadly died in exile, a drunken and broken man.