The Romanovs celebrated New Years quietly but a festive table was always set for visitors.

During this last difficult year of solitudes, sadness and stress  I can say on a positive note  I’ve been reading more  including histories and biographies.  I read the reminiscences of the daughter of the great Welsh poet, and discovered the  The Tsars by  Alexander Ivanov.  A very good friend was in Russia a few years back and shared all her travel tales with me. An exiled grand duchess made her home in Canada. I  also  have good friends from the Ukraine who have given me their stories.

Tegg,  our own Anastasia and a first year theater student was  moved by the story of the Romanovs to perform a soliloquy on the subject as part of a project. These images are my tribute to her touching and emotional presentation, so forgive the sad accompanying history for those who might not mind reading. The story of the last Tsar  reads like a Grimm’s fairy tale, at times beautiful, haunting, but ultimately dark, violent and tragic.    Anastasia was only 17 when she was executed (murdered) with her parents, three older sisters and little brother, in the basement of Ipatiev House by the Bolshevik revolutionaries under Yakov Yurovsky.

Tsar Nicholas had not been a very effective leader and was a reluctant one from the beginning. He didn’t want to be Tsar but the death of his father at the age of forty nine forced Nicholas to take the throne.  The family were deeply devout and religious and  they believed in sacred duty.  “God had ordained them to their position in life” and this ancient  idea and tradition kept them apart from their fellow Russians. Tsarina Alexandra  believed in the old autocratic rule and encouraged the Tsar in that direction.   Russia had been a serfdom  until the mid 1800’s and the new working class that arose did not fare much better in the cities than those who toiled the vast farmlands.

The reign of Nicholas seemed ill fated from the start. The world was changing rapidly and feudal Russia struggled to catch up with the modern progress of it’s European neighbours.  To make matters worse, Nicholas made a series of blunders – the first of which happened in 1896 at his  magnificent coronation celebration where all the ambassadors and royals  of Europe were in attendance..  Away from  the palace, the Khodynka  field in Moscow was designated for citizens and peasants to celebrate but it was unable to accommodate the vast numbers that did arrive from the outlying areas.  Eventually  there was a stampede with late comers  trying to get to the dwindling refreshments and gifts that had been provided. Thousands were crushed to death.  Instead of declaring a day of mourning Nicholas had been advised by his ministers to proceed with the  festivities.

This was not an auspicious beginning  and indeed as time went on, he continued almost naively to remain out of touch with the suffering of his people and the unrest that was brewing.  The disaster of the Bloody Sunday protest in 1905 further added to the cry for a revolution and reform. When Nicholas at last agreed to an elected parliamentary Duma it was too late. His war with Japan over Manchuria proved disastrous  and World War I was even worse for the Russian people.

In his personal life Nicholas was devoted to his Tsarina, Alexandra of Hesse. The two remained deeply in love for the rest of their lives and they were among the very few royals who actually shared a bed and bedroom. The palaces of the Tsar were worlds unto themselves and the family remained insulated there.  They were a loyal and loving, hands on family,  who spent as much  time together as they could. They took delight in  photographing themselves, and Anastasia, the youngest and impish daughter, had her own Kodak Brownie box camera.  The images captured were charming and natural and ultimately a poignant chronicle of an extraordinary family doing ordinary things.  Anastasia  even took “selfies” in front of a mirror. 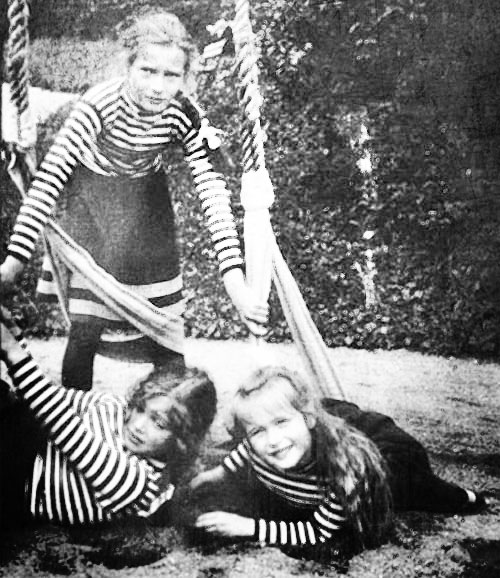 three of the sisters on a swing 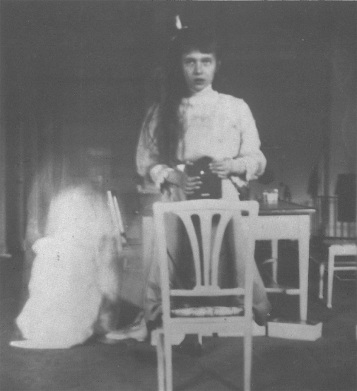 Anastasia taking a selfie in mirror

Her mother, Alexandra did not enjoy public life. She was disliked by much of the populace because she was German. She was reclusive and tried to shelter her beautiful  daughters  from the realities beyond the palace walls.   As opulent as the palaces were,  both the Tsar and Tsarina  preferred a simpler life without extravagance and were criticized for it by other royals who gossiped that the royal quarters looked like a second rate hotel . Nevertheless, by all accounts they were an affectionate, happy family.

After four daughters, at last a son and heir, Alexei, was born but the rejoicing  was short-lived.  He was found to be suffering from hemophilia.  Alexandra, who was one of the grand daughters of Queen Victoria  knew this came from her side of the family and carried a huge burden of guilt because of it. They tried to keep it secret  because  in those days,  hemophilia was a death sentence. In her desperation, the Tsarina came to believe that a mad monk from Siberia, Rasputin, was the chosen one sent to her by God, who could perform miracles and save the boy. This caused yet another rift between the royals and the people. Even  their own palace  ministers and relatives  hated this hard drinking, vulgar, and  sexually promiscuous “holy man” who held such influence over Alexandra. Rasputin foretold that if he was murdered by a family member of the Tsar, the Romanovs would be doomed.  It was Prince Yusupov, husband of the Tsar’s niece, who finally assassinated Rasputin after inviting him to a party.  As Rasputin predicted, the story of the Romanovs did unravel and come to it’s horrific conclusion.

After the revolution of 1917 which deposed him, Tsar Nicholas appealed for asylum  to his English cousin who later became King George V, but George ended up refusing, supposedly for political reasons. This sealed the family’s fate.

To the Communists, the Romanov family were symbols of a decadent and oppressive autocratic regime and as such they were held prisoners in Siberia for more than a year before the decision was made to brutally murder them. As anti communist troops were approaching  it is believed Lenin ordered the execution. The family with their loyal servants were told to gather their belongings and wait in a basement room for transportation to another location. A short while later guards threw open the door and Yakov Yurovsky , head of the squad, abruptly announced that the family had been sentenced to death which was to be carried out immediately .  The shocked Tsar could only ask “what?!” before he fell in a hail of bullets. The Tsarina and Alexei were struck next.  Few had time to even cross themselves. It was said 19 year old Grand Duchess Maria tried  in panic to escape through a back door but it was locked. The execution itself was botched as the young girls had sown family  jewels into their corsets for safekeeping which caused the bullets to bounce off them.  Crying and cowering against the walls,   the terrified girls  covered their faces with pillows as their executioners finished the grisly  slaughter with bullets and bayonets, and even  rifle butts.  Later accounts said that some of the guards had been very drunk.  They had tried to numb themselves so they could carry out such ruthless orders.  (Sokolov Commission)

For most of the 20th century no one knew what actually became of the royal family.  Rumours and stories circulated that one of the girls, Anastasia,  or the boy, Alexei, may have escaped . The years went by. The Siberian snow fell silently on the hidden  forest graves – weaving a cold winter shroud that enveloped the hopes and dreams of a family who  believed they would be saved from the terrible retribution  of a revolution that they did not understand. The Romanovs remain the epitome of blind  delusion and yet innocence,  thus becoming the ultimate sacrifice of  that turbulent and bloody  era.

In 1979 The remains of nine bodies were found  in the nearby Koptyaki forest, and then exhumed in 1991 after the collapse of the Soviet Union. Through Dna,  five were declared to be members of the Romanov family along with  their four loyal retainers. Exactly eighty years to the day after their deaths they were consecrated and   buried with great solemnity in a  ceremony in St. Petersburg, July 17,  1998. The two remaining children were found in 2007. All were identified,  thus putting to rest the stories that any may have escaped, especially Anastasia.

Prime Minister Boris Yeltsin denounced the murder as one of the most shameful pages of Russian history. The Romanovs  were all declared holy martyrs and saints by the Russian Orthodox church. Khram na Krovi or The Church on the Blood  was erected on the former site of Ipatiev House.

A happy and blessed New Year to all