Megan looked over the last  of the Black -eyed Susans glowing in the morning sun. It was time to lock up the summer cottage forever, she thought.  Something happened yesterday that had confirmed all her old fears and misgivings about the place. Some years before she had inherited the little house from her parents  but it had been years since she had come back to the lake- “as busy as life always was” she would explain to those who asked. Megan’s husband had finally coaxed her to re-open it so he could  take up fishing on summer and fall weekends. Somewhat reluctantly Megan agreed and with their daughter they began to spend more time there. Her daughter, Ingrid, loved it. Right away the little girl had found an injured crow that she nursed back to health and named Mr. Muninn.  Every day he would fly in from the forest for a treat and was very fond of perching on the child’s hand.  In spite of her initial anxiety Megan thought that perhaps all was healed after all.

There had been a reason Megan had not kept up the cottage. It was here that she suffered a crippling amnesia so long ago. It was as if someone had deliberately torn out the pages of a book- the chapter that would have held the clue to everything that occurred. Her parents told her that she was in hospital back then, but she had no memory of that. She was told she had been found unconscious in the hills surrounding the lake. When she regained consciousness she was somehow changed.  It felt to her like she had been gone forever but where she had been she could not say.

Afterward certain things would affect her dramatically, like the prisms of light shining on a dew drop or the moving shadows of trees in a windstorm. They resounded faintly in her brain like echoes of a forgotten dream, floating upward from the depths like outstretched hands but falling back  before she could clasp them. At those moments she would freeze up and the other children would call for mother and cry out  “Megan is having a seizure again” and either mother or father would come running and hold her till she came back to herself.  Eventually the seizures subsided and life became relatively normal again.

She grew up and married though she retained certain idiosyncrasies that were attributed to a childhood brain injury. She had a certain charming awkwardness and hesitation in her movements  and she had refused to dance at her own wedding for which her husband frequently teased her. She often wondered why she couldn’t bring herself to dance. She certainly loved music but she always thought of the old tale by Andersen about the red shoes. Perhaps if she tried to dance she might lose control and dance out of the kitchen and onto the streets  and end up like poor Karen, far away at the edge of the world and farther, where this time no one would be able to find her.

The morning before while Megan was still in bed, Ingrid had come into the room and lay beside her. She began to tell her mother a story. Mr. Muninn wasn’t really a crow, Ingrid said. He was a forest  spirit who could change shape and he sometimes talked to her and told her of another world beyond and yet beside the trees.  She said at night when everyone was asleep he invited her to sit on the wharf  so the water sprites could sing to her. Later that same morning Megan saw Ingrid dancing in the fleeting fog that often rose off the lake as the weather turned cooler. The ethereal tendrils had curled around her flashing legs and feet in the dawn light before they evaporated into the trees. 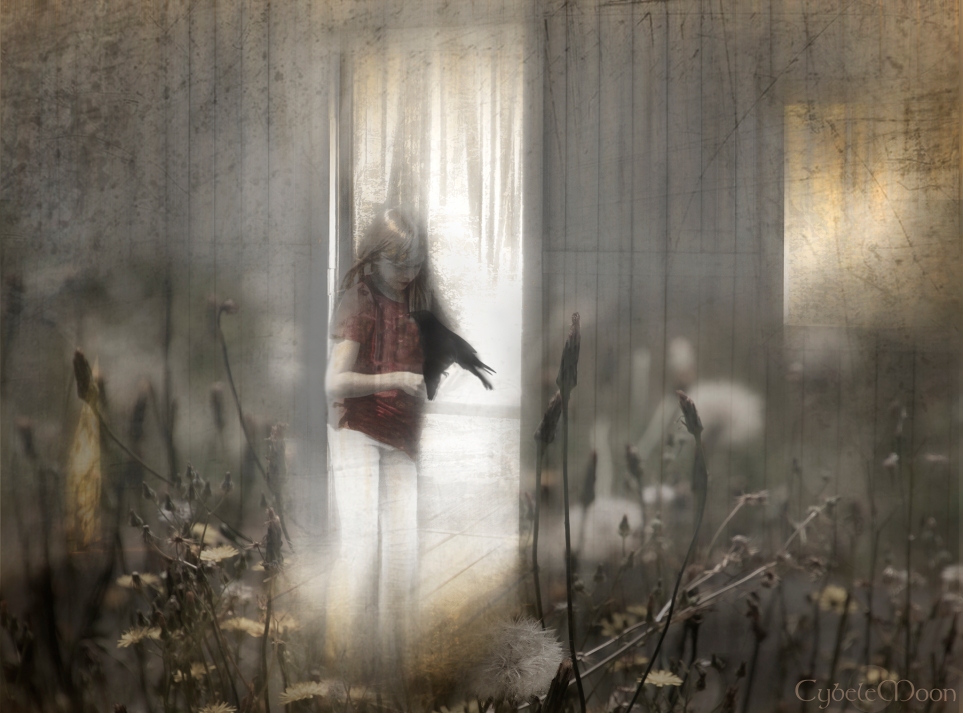 To an ordinary person this might seem like the fanciful imaginings of children and especially of a prepubescent girl like Ingrid, but Megan felt again that paralyzing tremor of her childhood.  She had observed her daughter murmuring to Mr. Muninn and she suddenly realized that all the foreboding and unease she had had about the cottage was real. There was some kind of altered perception or portal here. That evening she dreamed she heard strange, yet familiar music and saw the children dancing wildly in the grove as the stars fell all around them. Their feet were on fire and their hair turned to filaments of mist as they began to dissolve into motes of light until finally the clearing fell silent and abandoned. She awoke in fear and weeping, overcome with a sense of loss and sorrow. The next morning she found  rings of magical mushrooms that had sprung up around the door and all along the path.

So later that afternoon they packed up everything and went back to the town flat.  The cottage was boarded up and finally put for sale. Life became it’s usual comfortable and safe routine.  Mr Muninn must have long since flown away and no toadstools grew out of sidewalks. Children sat quietly in structured classrooms and were inside by supper.  Even so,  sometimes there were mornings, still folded between waking and dreaming, when Megan would bolt up in bed and exclaim ecstatically “How they danced, how they danced!!

the stolen child by Loreena McKennitt

(in Yeats Poem there is a darkness hinted at, of children abducted or of explaining the death of a child as an abduction of the soul by the fairies. There were also some children returned from the fairies forever altered or with certain changes such as autism or other disorders.)

*Muninn was one of the god Odin’s messengers. His name meant memory.

“It’s an absolute wonder; poignant, rich in lore, perfectly presented – and wrapped in Yeats and McKennitt – two of my favourites!”- I. Pey