Long after my Dad had traveled to Egypt and after we had the opportunity to visit and view the tomb goods of Tutanhkamun,  The  Mysteries of Egypt (Time of the Pharaohs) has traveled to us and The Royal BC Museum.  It has been unusually hot this summer and  the solar disk shines brightly in keeping with the ancient essence, though we too await the rainy season.

The Egyptians celebrated life and were profoundly spiritual.  Their book of the dead (Awakening Osiris) rivals the Biblical psalms in devotion, humility and poetry

Oh starry ones, I am but a man by the river, gazing up ( Egyptian psalm from The Book of the Dead) 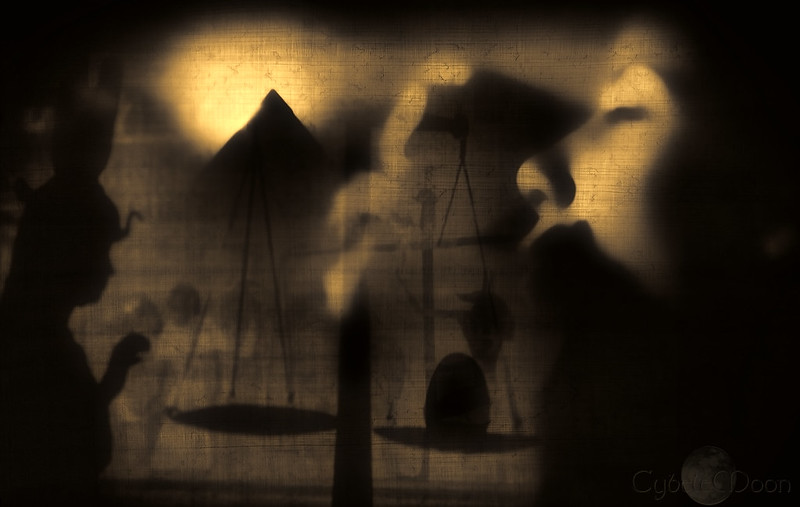 “I have not learnt the things that are not…”

The prayer of a soul at judgment. In ancient Egypt the jackal god Anubis led the soul into the halls of Maat (truth) where his or her heart would be weighed by the god Osiris against a feather. It was important that you were not concerned with the trivia of life “I have not learnt the things that are not..( of consequence)” To enter paradise you had to answer negatively to a list of transgressions that were different for every walk of life. If your heart was light of sin you passed into the blissful Field of Reeds.Should your heart not be found pure it would be thrown to the floor and devoured by Amut the gobbler. You would then cease to exist.

Here we have the great city of Amarna built by the rather unusual and great heretical Pharaoh, Akhenaten. Born Amunhotep IV during the 18th dynasty (circa1350 BC the New Kingdom) he later changed his name to Akhenaten.

Akhenaten was married to  Nefertiti whose name meant “the beautiful one has arrived.” He was the father of the boy king, Tutankhamun ( the living image of Amun), originally named Tutankhaten.  Akhenaten is the strangest looking of the Pharaohs. It is suggested that he had inherited a genetic condition causing his head to be elongated and his belly pouched. When Akhenaten was born, the great deity was Ra, a solar deity but also associated with the gods Horus and Amun.  Akhenaten claimed that heavenly beings came down from the sky to tell him that there was only one god and that god was Aten, embodied by the sun disk. This is a portion of his hymn to Aten

“How manifold it is, what thou hast made!They are hidden from the face (of man).O sole god, like whom there is no other!Thou didst create the world according to thy desire,Whilst thou wert alone: All men, cattle, and wild beasts,Whatever is on earth, going upon (its) feet,And what is on high, flying with its wings…..”

Of course the Pharaohs were believed to be related to the gods and therefore divine rulers themselves. The only other people who might challenge their authority were the priests, often relatives of the Royal Family. Their mystical temples were the houses of living powerful, gods that were tended, communed with and served, unlike churches of today which are more often treated as symbolic or spiritual representations.  Yet for some reason I am reminded of the old Catholic or Orthodox belief  (as with the Copts in Egypt today) where sacred ritual is still significant and the consecrated sacrament in the sanctuary is considered to be the living body of the divine Christ.

Akhenaten was a visionary but not a very effective administrator and his kingdom soon fell apart after his demise. Amarna was abandoned and the banished gods returned.

Long before Akhenaten,  Pharaoh Khufu’s funerary barge  carried his body down the river and was placed in the pyramid he had built at Giza circa 2500 BC (the Fourth Dynasty or The Old Kingdom).

There is a modern theory that the 3 pyramids at Giza aligned with the constellation of Orion which in Egyptian times was called Osiris, after the god who was murdered by his brother Seth. Osiris was later resurrected and became central to achieving the heavenly realm after death as it was he who weighed the hearts of the dead. Resurrection is not exclusive to Christianity and probably the Psychiatrist Karl Jung would have attributed it to the Universal Consciousness.  It is a powerful concept and the Egyptians strove to achieve this by the preservation and hopeful eventual regeneration of their earthly remains.

The theory proposed that at a certain time starlight would penetrate the long mysterious narrow passage that traveled through the pyramid walls into the burial chamber, filling it with light and thus the Pharaoh’s soul would be launched into those heavenly coordinates, a star gate so to speak where beyond lay the Fields of Bliss.

oh great Pharaoh, beloved of Maat, Horus of Gold, Son of Ra, Lord of the sedge and the bee
May you live forever in the stars

My own apparent connection to Egypt on mytrueancestry.com (?) a swiss dna data bank genetic match- mind you  have a bit of everything including  Celts and northern Vikings and Romans to the south