With some trepidation I have hit the post button and tentatively  re-entered the blogoverse. Was I missed!? I haven’t died or gone mad!

WordPress reminded me because if I wanted to keep my site plan settings I had to pay the required annual fee.

It’ was an incredibly rough time for me at the first of the year, dealing with family health and mental health issues – a long winter of discontent in which for a time I became almost as silent as snow. For some reason WordPress became a bit overwhelming and I didn’t realize how much time had gone by since my last post at Christmas. It will take a while to catch up in the social media scene and I may not be able to comment for awhile on posts until I get my rhythm back. I thank any who may have known a little about what was happening  for their prayers and good wishes. I hope everyone else is doing well and flowing along with the continuum as we hurtle through the starry ocean at 67000 miles an hour. I am not sure if that should be in knots but  I have tacked my sails to try to ride with the cosmic current!

Some little birds have built a nest over the door to the back porch and the daffodils are waving on the rise of our little hill along with the beginnings of the Camas lilies. I have been tiptoeing so as not to disturb our tiny tenants and yesterday chased off the neighbour’s cat. 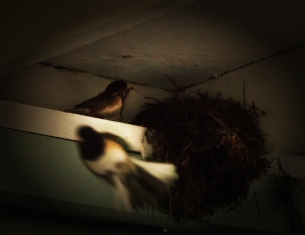 and at Easter -Risen