This little fellow leaves us coloured eggs and jelly beans. You know enough not to eat the black ones he leaves, right? 😀

In pagan times they celebrated the spring equinox and the Northern Goddess Oestre whose symbol was the fertile hare.  The renewal of the earth along with fertility are sacred aspects of life.  Of course the Christian church often incorporated or transformed pagan feasts into Christian celebrations.

In German stories the Easter bunny was an egg laying rabbit, and  that old tradition continued in the new world. Decorating eggs at Easter dates back to the 1200’s.  In orthodoxy dyeing eggs red was meant to represent Christ’s blood. Likewise, cracking the egg open symbolized the opening of Christ’s tomb. The religious feast of Easter represents a spiritual redemption and salvation, and however we each interpret these concepts, they are both powerful and meaningful.

When I lived for a time in Greece, I vividly remember the Easter celebration in Delphi (in ancient times famous for the Oracle and the temple of Artemis).  At the old Byzantine church we stood outside and lit each other’s candles at midnight. As they were lit people said Xristos Anesti  (Christ has risen)!  Easter is even more significant than Christmas in the Orthodox church. The ceremony on Saturday evening though long, was very beautiful with the chanting, incense burning and the holding up of hundreds of candles into the night sky. The Lenten fast was then broken and everyone ate for days! Though I hated the bleating of the lambs as they were led down the mountainside to their doom, the smell of them cooking on spits in the streets overcame my tender sensibilities and I enjoyed the feasting. Every street had a delicious barbecue plate and glass of local wine which would be pressed into your hands wanted or not. I never did develop a taste for Retsina which to me had a flavour of turpentine.

Unfortunately I was not as much into photography in my former travels and some of my old pics (on film) have been misplaced in my moves. But here is the  beautiful Cathedral of San Ildefonso in Merida, Mexico.

When construction of the church began in 1561 the native Mayans were forced by their Spanish conquistadors to help build it using stones from some of their own temples. Today many Mayans are devout Catholics (though they have incorporated their own Mayan traditions) and there is a hushed peace inside the Cathedral under the light of the beautiful vaulted  ceilings.

and a beautiful stained glass at St. Andrew’s in downtown Victoria, BC 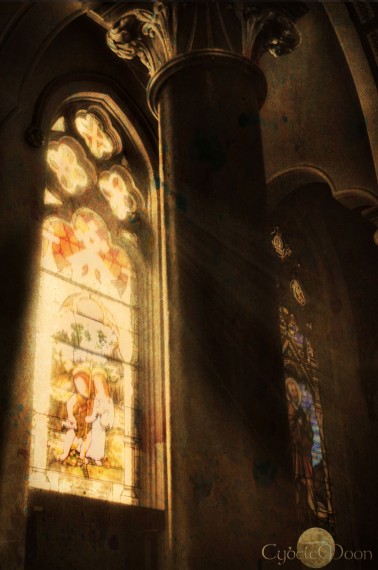