Pére Lachaise Cemetery was established in 1804 and was named for the confessor to Louis XIV. It was wonderful to walk it’s quiet shady streets on a hot summer’s day in Paris.  Here, my daughter and I joined many other grave seekers  looking to find the famous and the notorious, from actresses and singers to philosophers and poet rock stars.  Abelard, Moliere, Sarah Bernhardt, Chopin and many more are at rest in Pére Lachaise. 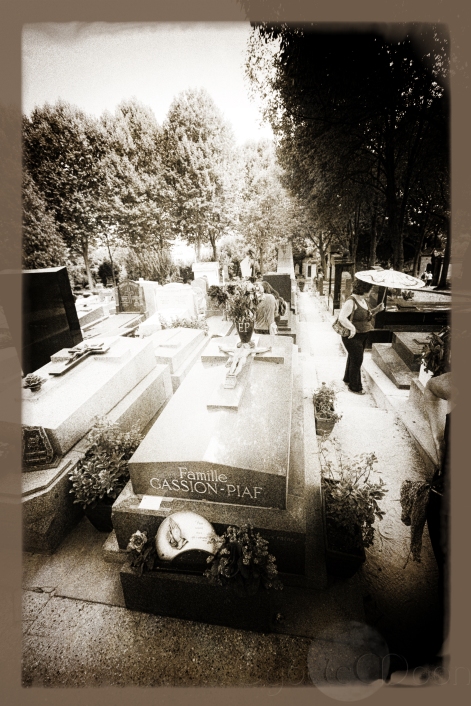 Edith (Gassion) Piaf, (1915-63) a French cabaret singer  from the streets of Belleville, Paris, was nicknamed La Môme Piaf- (the waif or the little sparrow). She was raised in a brothel by her grandmother who was the Madame.  Edith was not even five feet tall but her amazing and emotional vocal talent was discovered during WWII, and by the 1950’s she was the national chanteuse of France. She became internationally famous with songs like La Vie en Rose and Non, Je Ne Regrette Rien. Her life was stormy and tragic, beginning with the death of a child she had at 17 years old and a few years later, the love of her life who was killed in a plane crash. After an accident which left her in chronic pain she became addicted to morphine and alcohol. She died at age 47 of liver cancer. 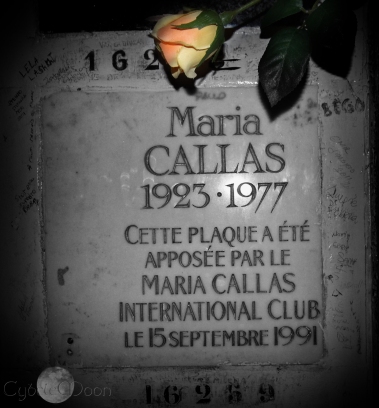 In the Columbarium I found Maria Callas.  Callas was perhaps the most famous and dramatic operatic soprano of all time but her last years were spent in seclusion in a Paris apartment.  It is said she died of a broken heart after her long and tempestuous love affair with the charismatic Greek shipping magnate, Aristotle Onassis. He betrayed her by marrying the widow of assassinated president John F. Kennedy, Jacqueline Bouvier Kennedy. Onassis died in  1975. Maria died two years later at age 53. In spite of all her previous great fame Maria’s resting place was marked only by it’s catalog number until 1991 when a group of opera fans paid for a plaque to commemorate her. 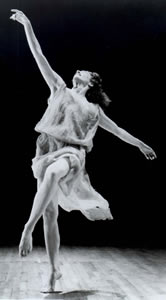 On the lower lever  we saw the niche of  Isadora Duncan, the famous and flamboyant  American dancer of the early 20th century whose own  life was marked by unconventionality and  tragedy. She traveled overseas and  became the toast of Europe but she lost her two children in a drowning accident on the Seine.  She embraced her own romantic notion of communism and the Russian revolution by marrying a Bolshevik poet and was then ostracized and rejected by her own country.  She died in 1927 in Nice, France, under most unusual circumstances.  While riding as a passenger in a Bugatti sports car, her signature long scarf caught in the back wheel and broke her neck. On hearing the news of the dancer’s death, the poet Gertrude Stein sardonicaly stated,”Affectations can be dangerous.” Duncan’s style and freedom of movement have influenced the dance world to this day. People still leave offerings and pay homage to her at the wall- so Isadora is still adored.

Finally we found the graves of Oscar Wilde and Jim Morrison. Oscar Wilde has been one of my favourite writers starting from childhood when I first read- with many tears- the story of  “The Happy Prince.” Born in Dublin, Ireland, Wilde became one of the leading playwrights and novelists of his time, employing  great wit and brilliant satire. One of the most famous of his stories was The Portrait of Dorian Grey. He was imprisoned for homosexuality which was a crime in Victorian England and wrote an essay of his spiritual journey which was later called  De Profundis. When he was released he left the British Isles for France and never returned. He died destitute in Paris. Visitors and admirers would visit his grave and leave lipstick marks all over the tombstone which prompted the placement of a glass barrier around the monument.

People still party at the grave of tortured rock star, Jim Morrison, who died at 27 in Paris of a probable drug overdose, though the medical records read heart attack. The roaches and beer cans of his fans and imitators have littered the site over the years and again, a fence had to be put up to try to protect the grave from desecration. Morrison had wanted to be a poet but instead became caught up in the sixties counter culture and joined the soon to be famous psychedelic rock band, The Doors. Jim was more of an alcoholic than a psychedelic but he was not afraid to push boundaries, always seeking new states of consciousness and as some believe courting death in the process. The music, coupled with his magnetic presence and frequent outrageous behaviour on stage overshadowed the poetry of his lyrics which often delved deeply into the hidden and dark places of the human psyche. His turbulent life and death became a legend. His tomb bears a Greek inscription KATA TON DAIMONA EAYTOY  “according to his own spirit.”

No, I regret nothing!