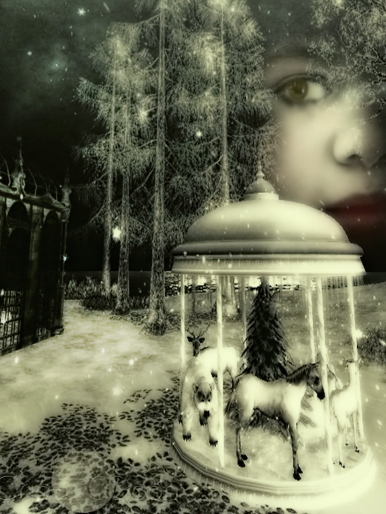 I’ve started writing a bit again- my usual rather fanciful tales especially at this time of year. So starting early,  here is a short story that is a  continuation of the winter adventures of Miss Alice Beamish. 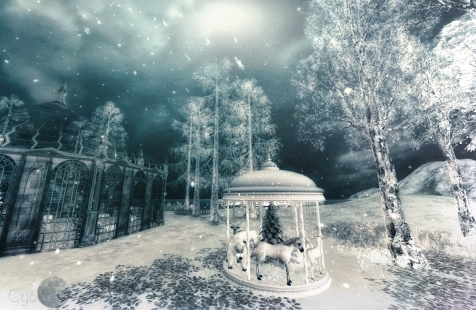 “Why this isn’t the same place at all!” said Miss Alice Beamish,”and where’s unicorn!?” She looked around the sparkling woodlands in dismay!  On top of everything else Mother had burned all  the eat- me cookies except for the two Alice held – one in each hand. She was very hungry and was therefore having a hard time leaving a few crumbs to mark the path. There wouldn’t be much of a trail to follow back home.  A beautiful conservatory was visible through the frosty trees but as she approached  she saw it was empty and abandoned.  Not far away, snow powder gently drifted around a lonely carousel. Sadly, the animals in pause looked as though they had frozen during the night and not a single person was waiting to ride!  Alice wondered where everyone was and what strange enchantment might have occurred here? She entered the empty glass ballroom and shivered slightly. Outside  she could see the snow descending gently over the world, and remembering a trick her brother taught her, she stood very still and looked straight up into the glass cupola. After a few moments of concentration she was at the center of a universe of falling snowflakes.

She felt her stomach drop as the sensation of ascent began.  A perfect garden spaceship had taken flight. The magic was working and everything had reversed. The snow no longer fell but hung motionless in space as the conservatory was propelled upward higher and higher into the heavens. Hundreds of hissing stars were shot from invisible bows and blazed by the window panes, melting Winter Jack’s lacey artwork.  Alice heard the echoing oboe of the solar wind interspersed with the percussive swoosh of meteorites and spinning planets! The smaller shooting stars reverberated like Tibetan singing bowls. “Why this is a place of music and dancing after all!” she exclaimed holding her hands over her ears as the floor tipped this way and that.  At once she became aware that the illuminated yule tree in the middle of the room was pointing toward the Constellation of Taurus.  They were definitely heading in the direction of Aldebaran and she knew now that she wouldn’t be back in time for tea. 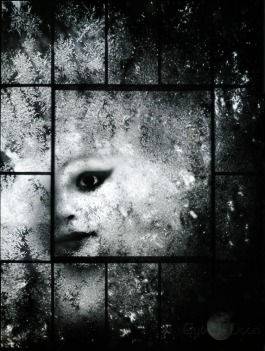 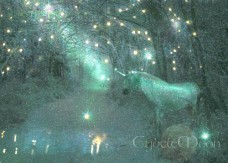 – for more illustrated story and to meet the unicorn check out the first story,  Alice’s Twinkling Winter Tale; – and in the meantime 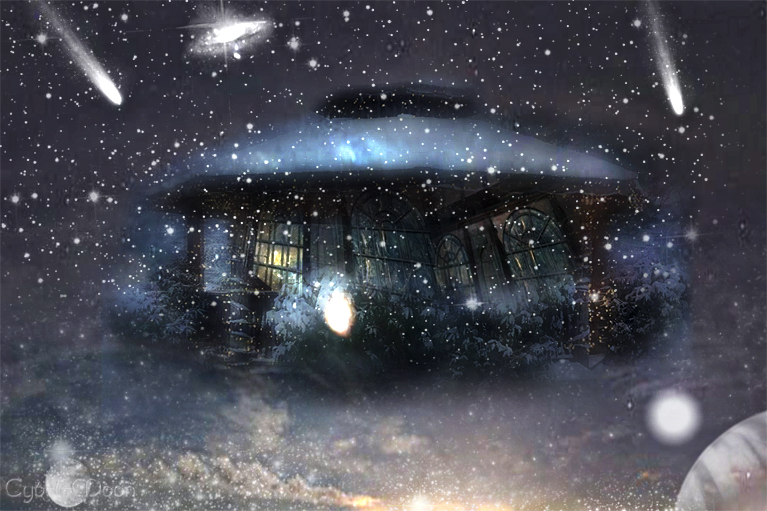 Drive the cold winter away

Info: Snow was created on my Gimp program

this story ( and info re: the images)  was also blogged on Desert Mice and Dreams after visiting the virtual world of “Let it Snow”