We sometimes summered at the lake when we were all young. I look at the old movies and photographs of us- mom, dad, and the four siblings, cousins, friends and grandparents, laughing, with arms around each other, and wish I could peel back the fading layers of time.  Sometimes I think I see light shining through the fabric and if I just put my eye closer there we all will be again.

We had no ipads or cell phones then to distract us from the business of living in the moment. Our time was spent swimming, water skiing, catching minnows, roasting marshmallows on campfires, meeting other kids on holiday, and generally running around like maniacs once again set free from the school year.

Some of us are gone and my brother died tragically a few years ago, but as in my photos, his imprint is stamped on this drift of moving tapestry. He and all the rest of us have left a memory here, stirring among the wind eyed trees and echoing on the lake like the lone and unknown piper whose plaintive longing swelled over the surrounding hills every twilight.

Though I’ve been back before, this was the first time in years that I ventured to the far side. Perhaps it was because I still felt keenly the untimely loss of my brother, but something compelled me to take a solitary walk and I soon found myself beside the old overgrown train stop where vacationers once spilled out on weekends.  I walked further but it was all barely recognizable until I saw the little bridge we would cross over with our  happy carts of summer supplies. There it was- an old, partly torn down and abandoned cottage waiting in ruins beside recently built and more luxurious vacation homes that have signs saying “no trespassing.”  I wasn’t even sure at first if it was the one we had occupied, it was such a sad and inappropriate relic of those good times. However, the dock behind was intact and the same as I remembered. This was where, in my sixteenth year and at midnight, I slipped silently and secretly into the lake with my sister, both of us sky-clad like mermaids under the stars, in some rite of passage, answering a call that I still hear in those moments before waking.

Oh very young what will you leave us this time, you’re only dancing on this earth for a short while

“I will never reach Ixtlan he said, “Yet in my feelings… in my feelings sometimes I think I’m just one step from reaching it. Yet I never will. In my journey I don’t even find the familiar landmarks I used to know. Nothing is any longer the same.”- Carlos Castaneda – Journey to Ixtlan 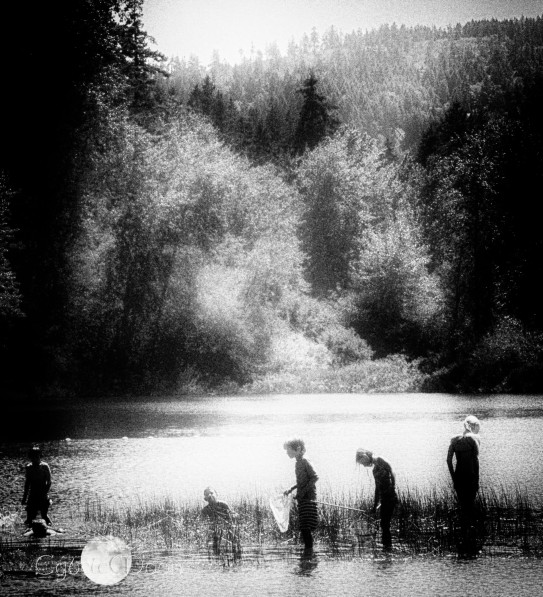 children at the lake