3 The Road to the Heavens

Smoke Jaguar sat alone in a chamber inside the palace while priests and augurs were at the solemn task of deciphering the mathematics of magic within the cogs of celestial destiny. He  had given them the message he had carried and now prepared to make a blood sacrifice as was the duty of the nobility. He drank a cup of sacred balche* which was mildly intoxicating before picking up a jagged sting ray barb and drawing it through his tongue. He caught the blood in a vessel full of bark paper to be burned as a gift and petition to the gods. The pain was excruciating. It pierced through the smoke of the offering bowl, opening a veil where time flowed between worlds like the blood that flowed in the most sacred of ceremonies.

For a moment he was back hunting in the Puuc* hills with his older brother. Losing his footing on a stone ledge he had fallen and bitten his tongue badly. He was bravely holding back his tears when his brother, Tortoise Shield, had taken Smoke Jaguar’s small hand in his and with the other, pointed toward the dark horizon.  “Do you see it?” he whispered reverently, “that place between the hills where Wakah Chan* reaches far into the sky.  The bridge is somewhere at the edge of the earth but only the bravest souls can find it.” He had smiled reassuringly at the little boy, “Our father’s feet have already walked it!  It is not a place of fear like the underworld, because the tree of life has risen from inside the earth and is entwined in the sky road.” His pain forgotten, Smoke Jaguar stood in silent awe and love of  both- the stars of the heavens, and his brother.

Some years later Tortoise Shield  died of a fever that no medicine or magic could quench. Many others continued to fall ill.  Smoke Jaguar hoped that the bridge between the earth and the starry road had not been broken by the displeasure of the gods. He hoped the great tree was nourished by the shedding of his own blood. He missed his brother.

Lady Ho Chuen appeared at the door. She was bowed in sorrow. She took his hands in hers and spoke softy ” More messengers have arrived Lord Smoke Jaguar. Your uncle, the king, is dead.  You are his closest living heir and will bear his title.” In sad resignation Smoke Jaguar wondered  what was left to rule. A way of life seemed to be collapsing and the terrible Ah Puch* walked the land. He thought of Ho Chuen’s dream and wondered how it could be possible to save the sun from the anger of Kukulkan. 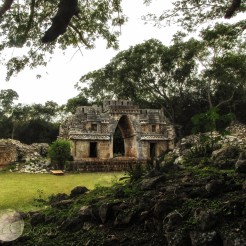 Interestingly, Mayan nobility often pierced body parts including genitalia as blood offerings to the gods. They also tattooed themselves. They flattened the heads of  babies into a loaf shape and in a type of ritual dentistry inlaid their front teeth with jade and turquoise. The more bodily adornments, the higher the status was of the individual.

Balche a type of mead made from the Balche tree