Robyn at Captivate me created this wonderful challenge of weekly processing a photo four ways. Do check out the One Four Challenge in the reader for all the great submissions. I’m a bit early.

For those who enjoy reading and who requested more story here it is and I hope I won’t disappoint. For those who don’t I hope the image is a story in itself!!

Lady Ho Chuen stepped out from the shadow of her loom and spoke softly.  “You have come at last!  My father and the priests have been waiting and so have I.” She invited the young man to sit and servants soon appeared at the door bringing  ceramic vessels filled with hot atole. As they both leaned forward to drink, Smoke Jaguar saw serpent tails of steam curl over her long forehead and into the luxurious black hair that was dressed in high rows on top of her head. Her eyes caught the fire from the torch lamps and flashed like an obsidian knife. He shivered slightly and a gust of night air from the hallway shook the blue green feathers of his headpiece.  Not long ago he had hoped they would marry and an alliance be made between their two cities, but now with the hardships that had come, those wishes had been put aside as the people struggled to make sense of what was happening.

Putting down his bowl, Smoke Jaguar turned suddenly and embraced the woman at his side.  He felt the beating of her heart quicken against his chest like the rushing wings of the quetzal bird whose feathers he wore.  After a few moments she reluctantly broke free and began to speak. “The people are leaving the cities” she said quietly, “The great ball courts are empty and there is talk of worse to come. The priests and nobles have been unable to appease the gods.” Lady Ho Chuen gripped his hand tightly. “Smoke Jaguar, last night I had a dream! The great Kukulkan swallowed the sun and was fleeing from the heavens. A blood rain fell upon our cities and temples.” Momentary fear gripped Smoke Jaguar.  “Aiiie my lady,” he exclaimed softly, “this is a powerful dream!  It must be entrusted to those who will understand  and I have brought the codice   from the priests of  the Wizard’s Well that may shed light on it all” 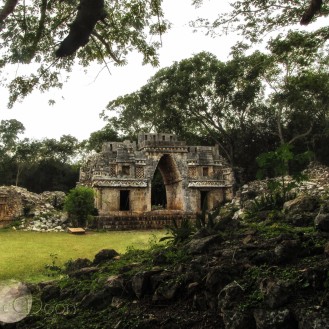 to chapter 3– The Road to the Heavens

also see: In the Jaws of Kukulkan

Somewhere around 900 CE and for unknown reasons ( possible deforestation, climate change, disease, poor government and warfare ) the Mayans began abandoning their cities and the empire and population greatly decreased. Though some scholars don’t like to call it a collapse because a few centers still thrived and remained populated, by the time the Spanish arrived (in the 1500’s) the great civilization had much changed.

I’m using some poetic licence as the most dramatic collapses were in Chiapas and Guatamala but the decline occured throughout the Empire.

Lady Ho Chuen– just for fun I used the name that a Mayan elder gave me that corresponded with my Mayan horoscope using their old calendar. It means 5 Monkey but also clouds were mentioned so  Muyal Chuen or Cloud Monkey was another.  The Mayans often had strange names and numbers were magical.  One king was called 19 Rabbit. The monkey however is symbolic of both the power of illusion and creativity which I hoped was inspiring!

Atole is a central American beverage mix made from corn and sometimes flavoured with chocolate.

Kukulkan is the Mayan equivalent of  the Aztec Quetzalcoatl- the feathered serpent of the sky- his developmental role in the pantheon of gods is shrouded in some mystery but he was a powerful symbol of vision, sacrifice and the state. At Chichen Itza he visibly slithers down the pyramid( el castillo) during the equinox.

Wizard’s Well or more correctly the mouth of the wizard’s well was the city of Chichen Itza.

in keeping with the spirit of the Mayan astronomer priests I layered this PS CC with a night sky background, a touch of blue filter and an art brush for this version.