Memories of a button hook child

Robyn Gosby’s One Four Challenge – and a short story

(a very old fashioned tale from days gone by) 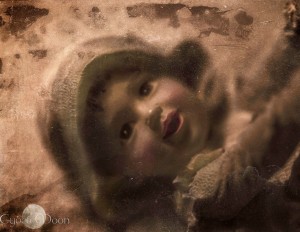 There was no telling how long sweet Bonny Tuliptoes  had resided on the mantel. She herself could not remember. Long ago she was joined by the infant, Bluebell Shadow who sucked her thumb, the tiny crybaby Cowslip Pout and Buttercup Bib who always had a look of quizzical surprise on his cherubic face. The little porcelain group had been carefully chosen and given a piece at a time to the little Mistress every Christmas. They were placed in the drawing room above the fireplace amid the candles and cedar boughs.

It was nerve wracking sometimes! They were only six inches tall with soft bodies and sparkling gauze fairy wings. Their cunning little arms and legs were the palest, most delicate porcelain and their sweet faces were framed by petaled bonnets. The other children of the house liked to come in and rearrange them and that’s how Cowslip Pout lost her foot. Cowslip was never happy and had a large tear drop that hung perpetually from her cheek.  She just plain didn’t like the whole arrangement in any form.

On this day, a careless hand knocked her over the edge. She fell a long way down and her tiny slippered foot hit the fire grate where it  shattered into hundreds of tiny fragments.  Cowslip shrieked in horror but it sounded like a cricket’s stridulation and was drowned out by the snap and hiss of the fire log. Certainly none of the big people had heard it. The rest of the fairy babes were very quiet and in shock. Bluebell continued to suck her thumb for comfort.

A parlour maid with a face like an annoyed pansy had plucked poor Cowslip up from the hearth. After examining her, she pronounced sentence and tossed her unceremoniously into the ash can. When the little Miss saw Cowslip all covered in soot she howled so loudly her brother came running and rescued the sprite from the cinder pit. He tried to make a new foot for her with paper mache, modeling clay, glue and a bit of paint. In spite of his effort it never did come out quite right. Instead of the clever rose slippered foot, a miniature pink cabbage adorned the broken limb. Though her companions refused to mention the appalling incident and pretended not to notice the defect, poor Cowslip looked more miserable than ever.  Bonny Tuliptoes on the other hand remained the bonniest of pixie bairns.

At the end of the challenge I hope to provide a glimpse of cowslip, buttercup and Bluebell also.

Last month was pretty tough for me personally. Thanks to all my patient and kind friends here on WP.  I had been asked when I am going to resume story telling by some so as it has been mostly rain and wind on the west coast I’ve ventured with my new macro lens indoors among some heirlooms and this is my humble offering for Robyn’s wonderful Challenge- with a story!  Thank you!

My Process:  I used a photographic plate filter, a bit of grunge and glow and a soft sepia tone

(connected to prev post  Memories of a Button Hook Child )