PS: Oh boy, I honed in on the subject of the knobs and hinges sans doors I realize!! I also often think of doors symbolically or metaphorically so with that in mind….

This is the door to St. Magnus in Kirkwall, on Scotland’s northern island group called the Orkneys.  The cathedral was built in the 1100’s by the viking earls of Orkney. As it is an older photo  I used a little processing.  In the close up of the door knob I used a multi lens in analog with a slight radial blur. I’ve written more about this magnificent church and the fascinating  Orkneys on my Gateways and Journeys blog. 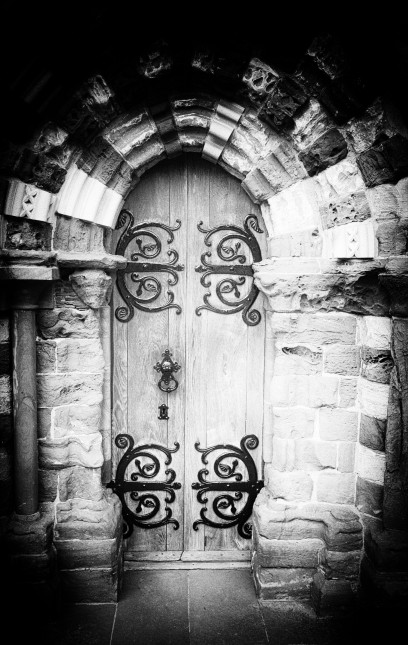 Now my slight misinterpretation of Cee’s subject in this photo of an old trunk in the basement that has a handle/hinge combination.  However, ancient riddles and maps to secret doors lie within.

And here I really sidetrack (not intentionally)    This is a knob that also opens  a door in a manner of speaking – a door to the night sky.

there are of course many doors, arghh; The Doors to Perception by Aldous Huxley, The Doors rock group from the 60’s , and the beautiful video by Duirwaigh Studios – A Knock at the Door with music by Martine Lund Hoel.  Prepare to jump into the wonder on this one for all you fairy folk!!

* and My own flight of fancy into the cosmos story: