(no photography allowed inside)

Along with the standing stones and stone circles that mark the Gaelic landscape in Scotland, another place of great mystery is Rosslyn Chapel. As anyone who has read “Holy Blood, Holy Grail” or “The DaVinci Code” knows, the chapel supposedly contains many secrets and treasures hidden by the Knights Templar (or their successors)  in secret passageways. The most precious of these was said to be the holy cup of the Last Supper. It isn’t too far from Edinburgh by the Midlothian city bus, and although I’ve visited before, my excitement still mounts when I see the signpost announcing Roslin village ahead and knowing that Rosslyn Chapel is nearby. 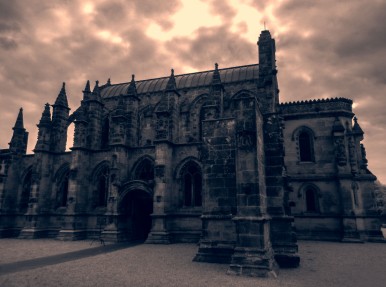 The church was built by William Sinclair, a son of the Earl of Orkney, in the 1400s.  The Sinclairs original name was St.Clair revealing the Norman connection to the family. William who was considered a ne’er do well by his father was never a Knight Templar. The knights had been dishonoured and disbanded by Pope Clement long before (in 1312). William’s great grandfather Henry, is “reputed” to have been a member of the order and is thought to be buried in one of the crypts under the chapel.   A prior William Sinclair, Henry’s son, is also buried there. He was killed in a battle in Spain while attempting  to bring the heart of Robert The Bruce to the Holy land for burial.*

The Chapel’s facade and interior are fantastically and ornately carved with strange symbols and sculptures that are said to contain secret meanings, maps and messages. One of these sculptures is of Saint Catherine’s Wheel.  Saint Catherine was the patron saint of the Sinclairs but many believe the carving to be representative of the Rose of the Knights Templar.   As one custodian of the chapel said,  “all  stories and conjectures usually conclude with the phrase it is almost certain” – which really means of course that it is not certain at all!

Nevertheless the chapel has long been associated with both the ancient Templars and the Freemasons of today which has  fueled the secret society theories such as that of  the Prieuré de Sion which has proved to be one of the great hoaxes of the 20th century (mentioned by both Michael Baigent of Holy Blood, Holy Grail and Dan Brown of The Da Vinci Code).

The Knights Templar  themselves had a long, controversial and colourful history. Though they began in the spiritual idealism of the early Crusades, in time they amassed great wealth in the Holy Land and became known for their excesses. “To drink like a Templar“ was an adage of the day.  They were eventually accused of heresy and sorcery by the church. Their order ended in dissolution and disgrace with the burning at the stake of their leader and Grand Master, Jacques de Molay in Paris.  It is said he died defiant, condemning both the pope and the church!

To date no treasures or secret passageways have been found – and the Holy Grail remains a mystical ideal, but the chapel endures as a fascinating and mysterious place- and a most intriguing tale!! 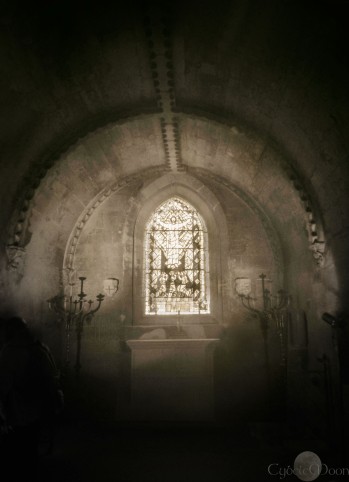 Photography is not allowed inside the chapel but down in the lower sacristy leading to the crypt  a kind custodian turned his back to let me quickly snap one.

*Sir James Douglas one of the knightly companions and long time friend to The Bruce apparently wore the heart in a case around his neck but he was also killed in the battle in southern Spain. (Added Jan, 2017)